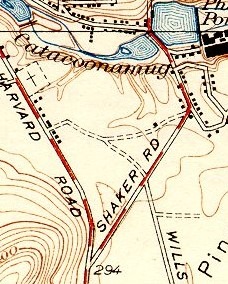 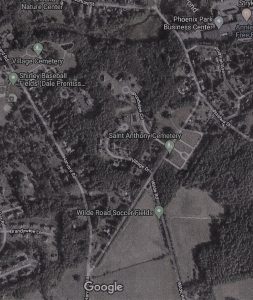 In the 1800’s, the community of Shakers owned the land along both sides of Shaker Road all the way from Lancaster to the railroad tracks. Their community closed in 1908 and much of their land was sold to the state of Massachusetts to be used as an Industrial School for Boys. Other people bought other pieces of Shaker property.
In 1910, John E.L. Hazen owned a house, barn, shop and 1 acre home lot on Harvard Road, plus a 47 acre Shaker lot.
The 1920 Tax report lists Ida L. Hazen owning a house, barn, shop, 1 acre home lot, 7 fowls, and the 47 acre Shaker lot.
In the 1930 tax report, it just lists the 47 acres on Shaker Road as the estate of Ida Hazen.
In 1933, John Buklerewicz bought those 47 acres of Shaker land at the corner of Shaker Road and Harvard Road and he built a small farm house on a logging road that went through the property. You can see the road in the 1939 map.
In the early 1900’s Polish and Lithuanian Immigrants believed that America offered jobs and hopes that problem-ridden homelands did not offer. With nation-wide economic troubles, famines, and religious persecution in northeastern Europe, immigrants fled to America with hopes of finding prosperity and acceptance.
Many Polish, Lithuanian and Russian immigrants began to work in the factories of New England. John was just one of the immigrants to be hired at Samson Cordage Works.
John Buklerewicz was born in Poland in 1895 and died at age 89 in 1984. In 1917 he married a Shirley girl from another Polish family – Michaline Swiryda (1894-1961). Her sister Josephine Swiryda married Ludwick Marcinkewicz (my husband’s grandfather). Her sister Maryanna married Mike Wolkinowicz who started work at Samson and later bought land and developed a dairy farm on Benjamin Road. Her brother Joseph married a Polish girl, Mary Gabralowicz and they had one daughter who married John Zukel.
The children of John and Michaline were Julius Joseph Buklerewicz (1920-2003) and
Vincesca Buklerewicz Carbo (1922-2001) who lived in Shirley most of their lives and Alberta Buklerewicz Babcock (1927 – 2017) who lived in Groton.
Many of the Polish and Lithuanian factory workers saved up their money and bought farmland, like John and his brother-in-law Mike. The other Swirydas and Marcinkewiczs bought small businesses in Shirley Village with the money they had earned at Samson.
In the 1940 tax list John had a house and 47 acres plus 1 horse, 2 cows, 1 yearling, 1 swine, and 45 hens. All of that was useful to supplement a factory worker’s salary.
There was a rumor that this land was once considered a good location for a trotting park but I could not verify this.
In the 1950 tax list, John had 47 acres, a house, and outbuildings but they did not list any tax for his animals. In 1960, he still had 47 acres, a house, and one outbuilding.
When my husband, Brownie Marcinkewicz went to visit his Uncle John in the 50’s and 60’s, he remembers one work horse, a few cows, and a big hay field on the property.
By the 1970’s, John had sold 11 acres and four new houses were built near what was later to be the MCI prison gate. In 1974, he still owned 36 acres.
After we were married, I remember visiting Uncle John with my husband. John would immediately set out three glasses on the kitchen table and insisted that we join him in a shot of vodka, pronounced “wodka.”
John Bukulerewicz died in 1984 at the age of 89. The wodka must have done him good.
For a while, in the late 20th century, the property along the old logging road was considered as a location for a new middle school.
In the 1939 map, you can see where there had been a road cutting across the property from Shaker Road to Harvard Road. I believe it was called Union Street, but I can not find the reference that supports my memory. Part of that road was John’s driveway. Another part of the road would be used as a base for a new development.
In 2006, folks were moving into the new senior condominiums on Village Drive.
By 2016, Pond View Circle was filling up.
Now, in 2020, all that remains of the old Polish farm is the small house on 3.7 acres off of Shaker Road.
Scroll to top