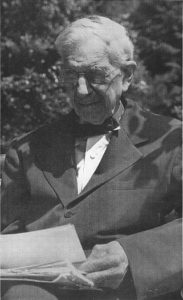 Emile Benton von Hesse MacKaye was born to nationally known author/actor/director/producer Steele MacKaye in 1879.   Unfortunately, Steele’s fame did not bring him financial security.  The MacKaye’s often retreated to a small cottage in Shirley Center.  Here on Parker Road is where Mrs. MacKaye and Aunt Sadie Pevear made a home for Benton and his sister and brothers.

Growing up in Shirley, the MacKaye children were encouraged to read, write, draw, discuss, and perform.  They were good thinkers and sociable young people.   Although he was comfortable meeting celebrities in New York and Washington, it was here in Shirley Center that  Benton enjoyed helping on the Longley farm, exploring the woods and swamps, and taking part in local entertainments.

Benton graduated from Harvard in 1900 and later received his Masters degree in Forestry from the same institution.  He first worked for the U.S. Forestry Service, then later for the U.S. Geological Service, the Indian Service,  and the Tennessee Valley Authority.

Benton was co-founder of the Regional Planning Association of America, and the Wilderness Society.  He felt that wilderness areas must be preserved for the good of the forest, the wildlife, and the people who need to escape and regenerate.  He took a look at what was happening to the development of the country and saw how it was all interrelated.

Benton MacKaye is best known as the man who proposed a continuous hiking trail through wilderness areas from Maine to Georgia.  His most famous project in regional planning was to become known as the Appalachian trail.

Books written by Benton MacKaye include The New Exploration: A Philosophy in Regional Planning, which is still the preferred text for college courses on regional planning.  He also wrote From Geography to Geotechnics, and Expedition Nine: A Return to a Region.    This last book tells of Benton’s walks around Shirley, and reasons for observing the environment.

Showing appreciation for the town that adopted him, in 1953, Benton wrote and narrated a pageant depicting Shirley’s 200 year history.  When he died in Shirley in 1975, tributes poured in from around the country.

The Shirley Historical Society has a collection of books, papers, letters, scrapbooks, and photos from the MacKaye family.  Besides information on Benton, there are also files on his sister Hazel who was an active suffragette, and his brother Percy who was a well known poet and playwright.  One corner of the Museum is devoted to the MacKaye collection and researchers are welcome to make use of this recently indexed set of materials.

More information on Benton is available at the Dartmouth College Archives.

Information gathered from many sources by Meredith Marcinkewicz