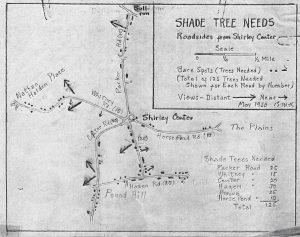 “One way to do that was to keep up the time-honored custom of the community gathering.” The group continued to meet four times a year into the 1960’s with some of the members being Benton MacKaye, Harriet Lyon, Lucy and Howard Longley, Gordon Banks, Charles Goodspeed, Robert and Eleanor Holden, Hermann and Kate Field, Mott Davis and family, Claude Pifer, Charles, Ethel, and Geoffrey Bolton, and Phil Lamoreaux.

“Another way to bring forth and retain the spirit of the village was to go after new neighbors to fill the empty houses.” The group then contacted people they thought would be a good addition to the community.

“Still another way to bring forth the spirit and environment of the village was to conserve its setting and landscape – its common, its shade trees, its roadways, and its houses which form the outward structure of the community.”

In 1930, Benton MacKaye had mapped the Center and the club presented a proposal for locating shade trees on the roads around the Common. Look for trees in the attached old and new photos.

According to Town Historian Lucy Longley, Boy Scout and Girl Scout troops planted maple trees around the common and placed glass bottles containing their names at the roots.

In 1945, members of this group were instrumental in preserving the First Parish Meetinghouse. In later years, many of these same Community Club members were also involved in forming the Shirley Conservation Commission and the Historic District Commission.

Nowadays, there aren’t as many social clubs that have such long lasting influence as that early Community Club of Shirley Center. 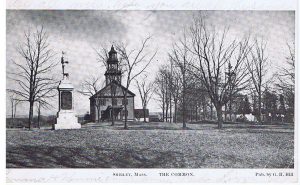