From Tales from the Common by Paul Przybyla

The year 2020 has been the second most active Atlantic hurricane season on record with 25 named storms as of October 14th.  In early August hurricane Isaias passed to the west of central Massachusetts with only its wind gusts and minimal rain affecting the town of Shirley and in late September hurricane Teddy passed east of Cape Cod on its way to Nova Scotia.  These near misses to us were reminders that New England has a history of being in the path of these destructive tropical storms and they deserve attention and respect.

The most disastrous hurricane to hit New England in the twentieth century occurred on Wednesday, September 21. Lucy Proctor Longley recorded in her Shirley Historic Diary “Breaking at 5:00 p.m. after a day of peculiar atmospheric conditions, the havoc wrought in the next four hours was unbelievable.  Chimneys landed in wells, barns were wrecked, roofs ripped off, pine groves felled – – no school, no water, no lights or heat, no refrigeration. Stores threw meats away, fall colored leaves lost their beauty.”

The attached map shows the path of the storm up the Connecticut River Valley.  Four prior days of steady rain had saturated the soils so that trees were at risk of uprooting in high winds.  Rain runoff threatened to bring streams and rivers to overflowing.  While in the tropics the hurricane had reached the equivalent of a Category 5 storm but it had downgraded to a Category 3 storm at landfall in Connecticut. As it moved north along the eastern seaboard it became sandwiched between two high pressure areas resulting in a record-breaking forward motion of 60 m.p.h. which amplified the wind velocity on its eastern side. The Blue Hills Observatory in Boston recorded average wind velocities for a five-minute period of 111 m.p.h. at three different times within the hour after 6 p.m., and a wind gust of 186 m.p.h.became the strongest hurricane-related surface wind gust ever recorded in the United States.

Harry Johnson, postmaster at Shirley Center, wrote from his home on Parker Road in a letter to his daughter Natalie of the damage in Shirley from the hurricane. “NO water, lights etc. in Shirley Village for a couple of weeks. Samson Cordage shut down, Suspender Mill operating 25% on old water power. Lack of water and sanitary conditions look bad for Village…You should have seen Parker Road and Center Road.  Big trees all down from Bull Run to Shirley Village.. …The Center School House shingles gone – one big window blew in and ripped the tar out of things in one school room and the beautiful big trees out front and the big one out back all gone. I was in there sweeping when the trees were blowing down.  I rushed over here to see how Mum was getting along as she was alone and I was afraid this house would blow down.  Your Ma was as calm as a cuke.  In fact she was ‘too busy’ to even know the wind was blowing.  But when I told her to come outside to look at all the trees blowing down into Parker Road and she was nearly lifted off her feet she realized that there must be a slight breeze…The house stood O.K. But you should see our pines out back – all gone flat and you can’t walk through them. Blew right through Wyman’s woods [on Whitney Road] and also all those pines around Wyman’s house down and ones near the house blown on top of the house.  Shirley Common looks like ‘Verdon’ battle front…. Mail gets here on time better than phone or wires because of planes and rail.  Making special effort on 1st and 2nd class mail because it is best way for communication.”

Close to 600 people in New England died in the storm.  Forests were decimated with a loss of 2.7 billion board feet of lumber from fallen trees.  The 3,000 acre Harvard Forest in Petersham suffered severe damage.  Through the effort of over 50,000 laborers from the New Deal’s Works Progress Administration and Civilian Conservation Corps, 1.6 billion board feet were eventually salvaged.  In New England 4,500 home were destroyed and another 25,000 damaged. Property losses were estimated at $4.7 billion in current value.  If an identical hurricane had struck in 2005, it would have caused $39.2 billion in damage due to changes in population and infrastructure.  Insurance actuaries talk of one hundred year events.  Unfortunately, it is not a question of if, but when, will the town of Shirley next experience its storm of the century? 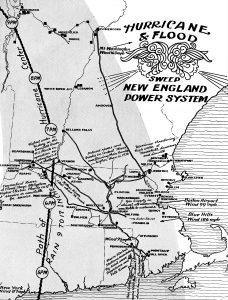 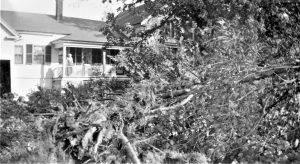 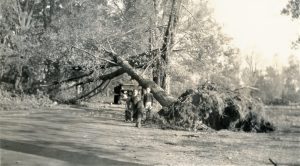 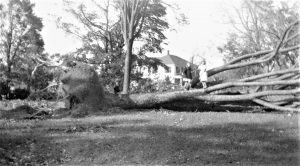 On the Common, old store in background 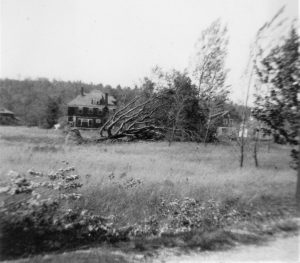 Looking from Lancaster Road across empty lots to #10 Harvard Road