In early years the animals were fed beet pulp as a supplement to their grain and hay, but during World War II it was impossible to obtain this, so they bought apple pomace from a nearby cider mill.

One special corner of the old barn at Longley Homestead was called a silo although noone remembers it being used for anything but hay. 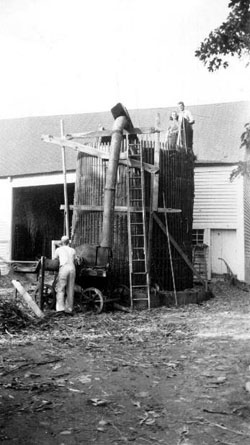 The first silos built in the barnyard on Center Road, was made of snow fence on a cement base. The fence was lined with sisalcraft paper and, when the chopped corn got almost to the top of the first tier, another round of snow fence and sisalcraft was added, and so on, until the corn was in. When full, it was covered with more paper and forked out as needed.

At the time we did not own a power takeoff, so they rigged the belt from the apronless ensilage cutter to go around the rear tire of the home made tractor. This ran a little faster than desired, but got the work accomplished. On more than one occasion the blower pipe blew off and sent the silage shooting up in the air.

The second silo at the Homestead was purchased second hand from Watts’ Dairy Farm in Still River and measured 12′ x 24′. The snow fence silo was replaced with another used one after a couple of years.

Our first ensilage corn (Cornell 29-3) field of about eight acres was planted in back of the Whitney Road house and was hoed and weeded with garden hoes. (The family didn’t have much time to get into mischief!) When the time came to harvest it, a crew went out with corn knives and came down each single row, putting the stalks in piles as they went along. These piles were set sideways in the rows so they would be easier to pick up. These were loaded on to a trailer and hauled to the silo for chopping.

As an experiment, the men tried cutting the stalks with the mowing machine and picking them up one at a time. This proved to be a no good system.

Our first ensilage cutter had an apronless trough and stalks were pushed into the cutter by hand – not a job for a child. After using the system for several years, a second hand corn harvester was purchased which lightened the work. 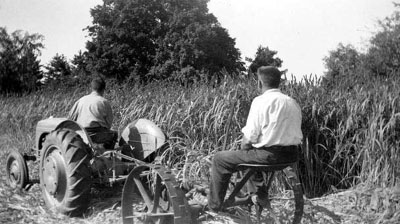 As time went on, the farm was not large enough to produce the quantity of hay and corn that was needed, so various landowners were asked if their fields might be used for feed crops. This gave the Longleys space for hay and corn and also was of benefit to the owners, as their fields were fertilized and utilized – thus keeping them from growing up to weed crops, brush, etc. Over the years, the family made use of about 22 different fields.

Aside from the corn, millet, Canadian peas and other seed was planted to be chopped and put into the silos. The photo above shows the men mowing millet down by Banks’ wall.

With technical advances, improved seed was developed that was more disease resistant and produced larger ears and stalks. The last few years of silo filling, feed crops like alfalfa and corn were sprayed to discourage weeds and weevils.

A source of amusement to the family was in finding evidence occasionally that someone bad been stealing a few ears of corn close to the roadside. This must have been tough and not particularly sweet for family consumption.

One day during WW II, a plane from Fort Devens flew so low over the field that it de-tasselled some of the corn. 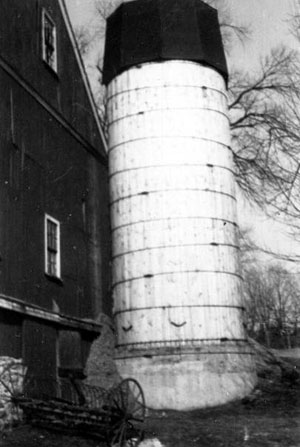 By 1946 a larger silo was needed and staves, hoops, doors, etc. were shipped from the Unadilla Silo Co. in New York and the men built this on the Whitney Road farm. This was built on a cement pit and was 12′ x 31′ when completed. This was specially treated so that the ensilage would not spoil.

As equipment for cutting corn became more sophisticated and fields were made larger, the family went from cutting the rows by hand to purchasing various corn harvesting machines. The first was made to be a horse-drawn machine and had to be converted so as to be tractor drawn. It cut the corn and a man stood on a platform (with a bar holding him from falling off) – and bundled the corn with his arms as they went along. When he had enough corn, he’d release the bar and throw the bundle to the ground. Howard said it was one of the dumbest purchases they ever made.

From this, they advanced to an old McCormick binder that had to be freed from the trees that were growing through the middle of it. It was supposedly a good machine and worth the effort of fixing it up. Joe Onners, a local mechanic, freed up the mechanism and they were able to use it for several years. This worked fairly well but had the annoying tendency to tie double-sized bundles – instead of 40 pounders, they would weigh around 80 lbs. – a challenge to lift. It was jokingly suggested that the machine was constipated when this happened. 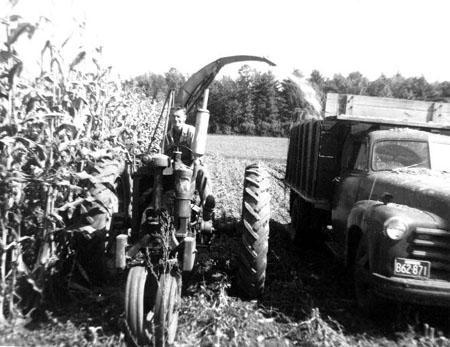 When the opportunity came to buy a more efficient binder, they did so. The accompanying photo shows Melvin chopping corn into the truck driven alongside.

With larger silos someone had to be inside the silo part of the time to distribute silage evenly. We had a funnel-like pipe that was aimed by use of a rope. If noone was available to do this, they’d stop once in a while and even it with an ensilage fork.

After each load the silage would have to be tramped – usually by the youngsters. After this job the participants were always anxious to have a shampoo.

The photo below shows Kenneth and Howard starting to fill a snow fence silo next to the large one.

A field ensilage cutter was purchased in 1965. This not only cut the corn in the field but chopped it and blew it into a high-sided truck. When the truck was loaded the driver headed for the silo and someone would fork the load into the auger blower. 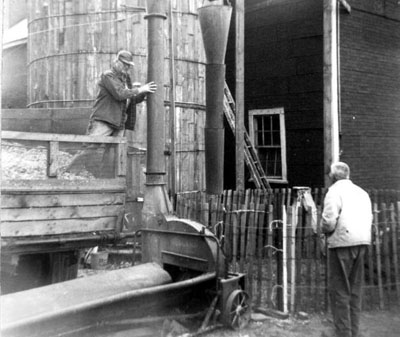