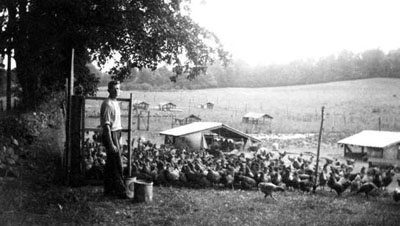 During the years that he was raising chickens and selling dressed poultry, he gradually built up a herd of registered holsteins by buying heifer calves, one or two at a time. Most of these came from Charlie Flagg’s Nashobaside farm in Littleton. As they grew to adulthood he soon decided to ease out of the poultry business and concentrate on building up a dairy herd.

Melvin married Louise Hitchcock, from Staten Island New York in 1940. Their five children, four sons and a daughter, all were instructed in the usual farm jobs at an early age. Photo below at right shows Melvin Sr. and Jr. 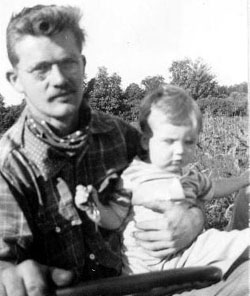 The Longley children were always “on call” for helping with the various farm chores. Often their friends were included in everyday farm practices. One job that several neighborhood youngsters shared was getting shavings to be used as bedding for the cattle. During the forties and fifties it was sometimes hard to find a sawmill or lumber yard that had these to spare. There were so many farmers who needed the shavings that the bins were kept pretty well cleaned out, particularly in the winter when the animals spent nights in the barn. Melvin’s Uncle, Ray Proctor, had a contract with a mill for a while, and this meant he had to keep the bins empty consistently so the pipe wouldn’t get plugged. This worked fine part of the time as Ray could assign other farmers, including the Longleys, to get a load or two if he was busy with some other farm enterprise. This meant that our truck and ‘volunteer’ labor had to be available when Ray would call. 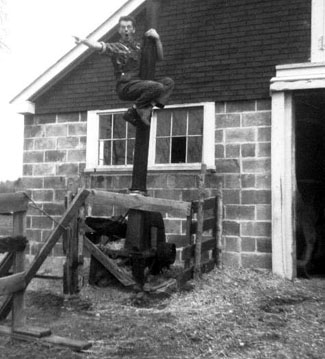 Melvin moved one of his good, unused, chicken houses to a place at the end of the barn and tried to keep this filled. When the shavings business got really rushed he had an old ensilage blower adapted to blow them up the pipe into a large area overhead in the barn. Twice a day someone would go up and push enough shavings down a chute to be under the cows.

There was a variety of sources for the shavings – one toy manufacturer in Leominster, a reel producer in West Groton (photo below shows racing vehicle made from West Groton reels, driven by friend Danny Moriarty), and a lumber yard over the line in New Hampshire were suppliers.

One lumber company had their bin in the cellar and the truck had to be backed down a ramp and the shavings shovelled up over the tailboard and into the truck. It was less than delightful to shovel a load when the planer was shooting the shavings at the same time. Sometimes one had to wear a mask to protect himself. 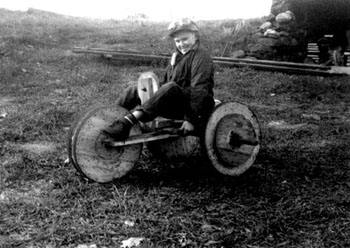 Evidently all children who participated in these work parties remember them. One tells of how they’d ask “Do we have enough yet?” Melvin would reply “Did the last shovelful fall over the side?”

If the answer was “No”, Melvin would say “Then we aren’t loaded yet”.

In warm weather the truck would usually stop the way home and all would be treated to ice cream.

Other jobs well remembered include pulling up Queen Anne’s Lace by the roots and hauling the bunches down to be taken to the dump. If these were allowed to blossom fully they could flavor the hay and, consequently, the milk.

Chopping thistles before they blossomed was another ‘fun’ job. If these were not controlled they could take over large areas of pasture. 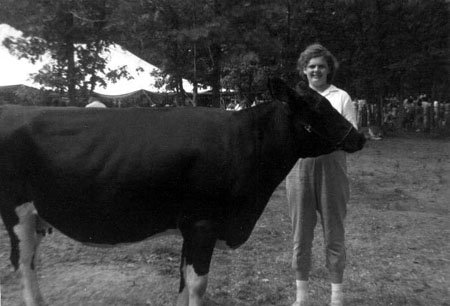 Melvin volunteered to lead the local 4H Dairy Club and did so for quite a few years. When Stephen was too young to belong officially to the club, he was adopted as the mascot. As soon as he was eight years old he became a ‘Clover Bud’. When he was too small to compete in the fitting and showmanship contest he was given his own calf and show box.

The club met every month and learned all sorts of farm-related skills – knot tying, selecting good hay, animal care and health etc. They showed regularly in the County Fairs in Groton and Westford and at the Shirley Grange Fair, and gained practical experience as well as the honors accompanying blue and red ribbons. 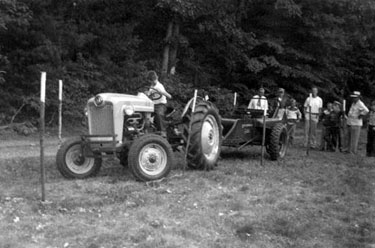 Catherine’s heifer, Longley Acres Lucky Seven, was Grand Champion Holstein four years in a row. In 1959, Cathy was stricken with encephalitis at Fair time and her friend, Carol Eastman, showed her cow and Lucky Seven was awarded her fourth pewter pitcher.

As the boys grew older they participated in the tractor driving contests. (Melvin is pictured backing a manure spreader.) After winning at the county fair, Jonathan participated in the state-wide competition held at U. Mass in Amherst. Prior to this he spent many hours backing a two-wheeled trailer up the Whitney Road hill for practice. 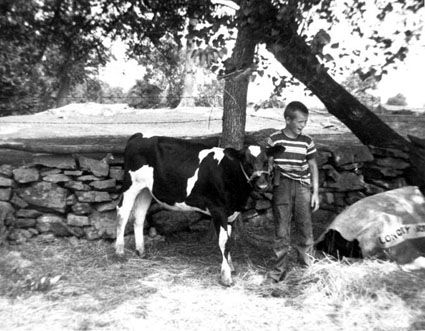 As 4H members, the club was required to put on demonstrations annually. One program that particularly delighted town youngsters included a live holstein calf on stage at the War Memorial Building. Pictured at right is Jonathan and some calves getting ready to be shown.

One of the youngsters got interested in sheep and the first ewe, Patty, was purchased from a lady in Leominster who allowed the sheep into her house. When Patty had her first lamb it was bought by one of the other children and, three or four years later, there were about thirteen sheep in the flock.

It was a pleasure each spring to watch the young lambs gamboling about their pen – or having a nap on their mother’s back. We always had alot of visitors at this time of year. 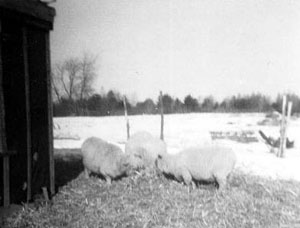 Each spring there were customers who wanted lambs for the Greek Easter.

One part of the sheep raising business that presented a problem was the shearing. This was done in early June and was a back breaking chore, as you had to bend over the animal as you sheared and, by starting at the neck, the shearer was supposed to work around the animal and get the fleece all in one piece.

While Melvin and the boys all had turns with the shearing, it was Jonathan who usually ended up with the job. Neighbors had sheep and had problems getting anyone to do the shearing so would sometimes call one of the boys to do it.

The Extension Service arranged for a wool pool each spring and, by supplying our own wools we could have, beautiful blankets made for a small charge. If you didn’t come out even and needed more wool for your blankets, you could purchase it through the wool pool.

At about the time the neighbors had bought all the blankets they wanted, the children had grown tired of the sheep business, so they were sold.

When there were no other pressing jobs waiting to be done, the entire family could be involved in getting the winter’s wood supply. The men folks would load up a trailer with tools and go into one of the woodlots and cut. After this was hauled in and out and split, the woodsheds were filled at both farms. Lucy and Louise and Cathy did their share in the endeavor, as Abby and her daughters surely did, and the Longley women did before them. It is a good thing to know that when winter starts there is a good supply of wood on hand.

Melvin decided in 1943 to join the Holstein-Friesian Association in Brattleboro, Vermont. They had specific rules for registering Holstein cattle – these black and white animals must have a white switch, have a solid ring of white above each hoof, be offspring of registered Holstein stock, etc. Each calf that was to be raised had to be drawn (or photographed) from both sides and, after sending in the application plus the fee for registry, each animal was numbered and properly registered.

He soon decided that he wanted his own prefix and applied for ‘Longley’ as first choice but found that this was already being used by a Longley in Maine, so we settled for ‘Longley Acres’. Hence, all cows were named with that prefix – Longley Acres Lucky Seven, Longley Acres Star Sunbeam, etc. Usually the outstanding name in sire or dam’s official name was carried on.

The Holstein Association had a classification program whereby cows (and bulls) were scored as to type and dairy character. Longleys had this done two different years and were pleased to have one classify Very Good, which was considered top notch. Most of the animals rated Good, which is average.

The herd was on Dairy Herd Improvement Association test for several years. A tester would come once a month, before the evening’s milking, and weigh each cow’s milk and test it for fat content. Usually, he stayed at the farm overnight to sample and weigh the next morning’s production. There was one tester whom the famers’ wives did not particularly look forward to having come as she always had his wet bed to tend to in the morning. When neighbor, Earle Graves, was the tester, he would go home after night chores and return early the next morning.

The DHIA sent out a newsletter which listed the top ten producers in the state, and Longley Farm was on that list many times.

Until about 1946 bulls were used for breeding, but the Selective Breeding Cooperative offered top quality sires that were supposed to produce higher quality offspring. Also, it was quite a responsibility to keep a large bull on your place. These cooperative had large bull barns at various locations and, by phoning early in the morning, you could expect a technician for service that day. First calf heifers were usually bred to smaller breeds, like Jersey, bulls so their first calves would not be too large. For a long time the technician was Albert Pickard from Littleton and most farms had one calf named Alberta. 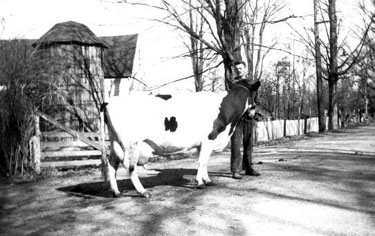 Several times the men went to large New England herd dispersals or sales to purchased from higher producing blood lines to add to the cow family. They bought a nice Holstein calf in Maine and, after raising her to milking age, she proved to be an excellent producer.

Another cow was bought with an exceptional production record but, at four years of age, her vitality was all used up. She had been fed too intensely and brought to high production too quickly. They did not keep her too many years as she was all worn out. Pictured is a nice milking cow that was bought at a Maine sale – Lona Dora Return.