Howard and Melvin devoted what time they could to local endeavors. After the hurricane of 1936, Howard was appointed to the New England Timber Salvage Administration. He was the go-between for the farmers (or other landowners) and the government. His job was to okay the government buying downed timber for logs and advised the owners what amount they could expect the government to pay for them. There were so many fallen trees that the logs had to be dumped into ponds and, over a three year period, they were fished out and salvaged to be sawed into lumber.

During World War II Howard was a Civil Defense Air Raid Warden and was required to check out the neighborhood regularly to be sure everyone had blacked out their windows in case of enemy attack. Other people in town (Ken Longley was thought to have been included) were on the airplane lookout detail. They were familiarized with the different kinds of aircraft and were prepared to report any alien aircraft immediately.

Melvin occasionally filled in as school bus driver if, for some reason, the regular driver was not available. After one such trip he remarked that this was the only load he ever hauled that loaded and unloaded itself.

Melvin worked with the area Holstein Friesian Association and arranged for the first Black and White show to be held at Longley Acres in 1946.

He was also a reporter for the New England Crop and Livestock Reporting Service for more than ten years.

Both men served in town and county soil conservation efforts. They also attended seminars on different aspects of farming.

Melvin was especially honored in 1980 when he was selected to give the Memorial Day address on the Common and at Whiteley Park in the village. This was after the cows had been dispersed and Melvin was working at the Lura A. White School and was active in the newly formed Shirley Historical Society.

Following is the text of his talk:

“Many of you here remember Shirley of the 1920s and early 1930s. Those were the days when we had the last few members of the Grand Army of the Republic come to the schools to tell of their experiences in the Civil War. In those days we had a day off from school to scour the countryside to gather the many tubs of wildflowers to decorate the graves in the cemetery which had an American flag.

In those days, the grammar school student who could best recite the Gettysburg Address was chosen to recite it at the exercises on the Common. My sister was selected one year and I badly wanted to do it, but never did. Now, fifty years later, I am standing here – but not to recite Lincoln’s address. It was a long wait.

At anytime of the year, but especially in the spring, our New England countryside is beautiful. We sing our praises to the blue skies, the purple mountains, the green valleys. We thank God for our senses that we can enjoy our beautiful land. On the other hand, what are blue skies, purple mountains or green valleys without people to see and enjoy them? America is not acres of grain or majestic heights. America is PEOPLE – millions of people who came from lands all around the globe. Look around you. That little knot of people over there – they are America.

On this day, thinking of the men and women who have given their all so that we might enjoy our American heritage we find ourselves believing that their thoughts at their time of terrible crises were not just of the noise of battle, of pain, of mud, or heat, or cold but thoughts of wives, of mothers, of friends and of the peace and beauty of their homes and towns.

We have come many times to this Common to participate in the Decoration Day exercises. What should impress us the most about this is our single-minded purpose. We, as countless others in their towns across the land, gather to honor our war dead, to keep alive in our children the feeling of thanks and the need for strength in our time as they had strength in theirs.

Under the green canopy of the churchyard lie Shirley men who served in the Revolution. Was their effort in vain? Only if we fail to remain strong.

On the stone marker here, is the list of men who answered the call of 1861. Were those sacrifices for naught? Not if we remain united.

In all our cemeteries in town are the graves of the men who fought for us in all the wars of our country. Be assured that they did not struggle in vain – not as long as we remember.

These are trying times. We are not the first to make that statement. Other times have tried people to their utmost, but they made it through.

We have today what seem insurmountable, national and international problems. We have drug problems with our young people and there are those who say we are headed down a cart path to nowhere. This is simply not true. With stronger leadership in this country we can surmount the difficulties that lie ahead. Surely we can equal the fortitude and commitment of those we honor here today. We CAN, we MUST, get ourselves on the high road to a somewhere of our own choosing, to prove to the world but, more importantly, to ourselves, that we can stand together with one purpose, as one peoples for a stronger and better America.”

When the herd was dispersed in 1969, Melvin kept one milk cow for family use. She presented us with twin bull calves who we named Rutherford and Hayes. 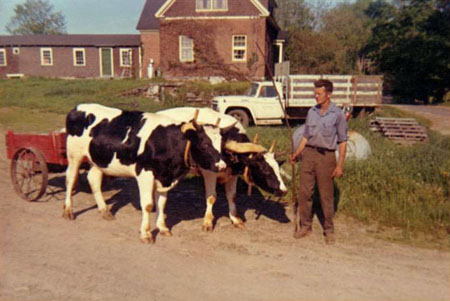 Melvin had long wanted to raise a team of oxen but had never found the time. Ruthie’s twins came at an opportune time so he decided to train them.

We soon found that there are no books available on the subject, so it was an experience of trial and error.

Melvin made a small yoke to begin with and led them around with it at first. Then he thought it would help if they were left in the barnyard wearing the yoke so they would get used to it. Imagine everyone’s surprise later to return and find one headed in the opposite direction from the other!

There was an old mortar box on the farm that made a perfect vehicle for the oxen to pull. It had a hole in one end where a chain was put through to the ring in the yoke. Melvin hitched it up and told the oxen to proceed and they did fine on the dirt pathway, but as soon as they hit the pavement the sound of the metal box on the gravel startled them and they ran as fast as they could down the road and didn’t stop until they got to Burne’s – about a quarter of a mile away.

Rutherford and Hayes were trained to pull a small cart which was just right for taking youngsters for rides about the town. They were undoubtedly the most photographed animals that ever lived in Shirley.

Melvin used them to go into the woods and bring back small loads of firewood. Sometimes he hitched them up and used them just as a means of transportation, which was further training for them.

Some subjects have not been covered in this little dialogue – animal health problems being one. In a herd of any size there are bound to be all sorts of troubles from time to time – mastitis and acetonemia, pink-eye and lump jaw, hard ware disease and foot rot, milk fever and miscarriages – our cows had them all.

Occasionally a cow with milk fever would have to be rolled over four or five times a day until she improved.

A cow with a pendulous udder would have to wear an udder support (not Playtex). These were very difficult to keep clean.

Once we had to put a flaxseed poultice on a cow that had pneumonia. 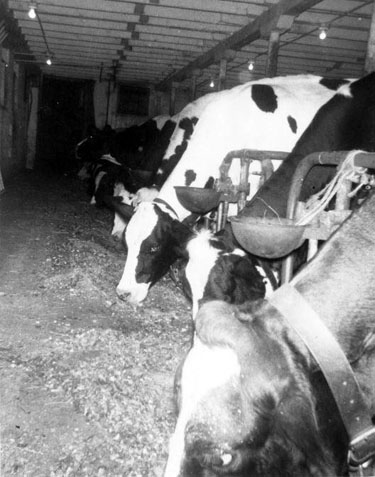 Then there was the cat that the cow slept on one night. We thought Pussy was surely crushed to death, but when the cow got up, the cat gradually puffed up, stretched and walked away.

Since going out of the milk-making business in 1969, the Longley farms have had to adapt to the times. A small area is still hayed and will be as long as the machinery keeps working.

We have tried to keep our fields open and available for agricultural uses by renting them for pasturage and some vegetable growing.

The silos have long since been taken down and stanchions removed from the barn. Hay and some firewood are stored in the barn and the main barn has become Melvin’s workshop, tractor garage and storage area.

The boys have all married and each has some agricultural enterprise. Melvin owns a small farm in Westminster and grows chickens, beef, pork, etc. for the family; Stephen has his fruit trees and garden plus a couple of young horses that his family will be training to ride; Jonathan keeps a nice vegetable garden each year in his city yard; Ethan is probably the only Cucamonga citizen who raises his own duck eggs.

In ways it seems too bad that our grandchildren don’t remember any of these routine farm chores and pleasures. Perhaps through this little sketch memories will be stirred in all of us, and our grandchildren, and other generations after them, might be able to picture how it was with all us farmers at Longley Homestead and Longley Acres “way back when”.