The task of stocking the barns with hay always begins with closely scrutinizing the looks of the upcoming weather. A field should not be mowed unless the prediction is for good weather ahead. In the earlier days the grass, in early summer, was cut and allowed to wilt for about three days. As the summer progressed and the weather was drier, the time could lessen. After the purchase of a hay crusher in the early sixties this was accomplished a day sooner.

The most desirable way to hasten the drying process was by using a tedder which turned the hay and kept it spread evenly. After it had dried sufficiently it would be raked into windrows. One way to check whether the hay is dry enough to rake is to take a few stems and twist them. If they seem brittle, the hay is ready.

Grass was mowed, raked and baled in a clockwise direction. If it is teddered, it is done counter clockwise.

After a field is mowed there is always one back swath next to the wall or fence that has to be rolled in the ‘wrong direction’. This is true when raking and baling also, making a rather large windrow around the edges. Melvin often said that there are no back swaths in heaven. 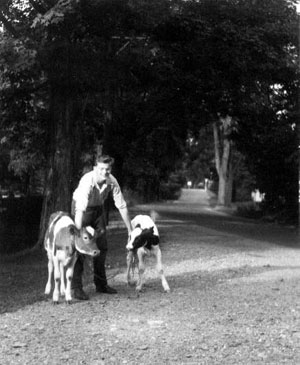 When it rained on hay that had already been raked, often they had to spread out the windrows by hand with a pitchfork.

The accompanying photo shows Melvin with some of his first heifer calves.

Drying the hay was accomplished with the use of a ‘kick tedder’ which fluffed it up and turned it.

The old wooden-wheeled dump rake had a seat. One summer a city teen-ager, Ivar Wilhelmsen, was visiting and wanted to ride the rake which Melvin was pulling behind his old truck. It really didn’t work too well as sometimes, when the track stopped, the rake kept going, the shafts sliding up on the back of the truck and tipping the rake backwards, as it slid. When this happened, it left Ivar sitting on the seat with the rake at a 90 degree angle to the track – with nothing to hold on to but the seat. 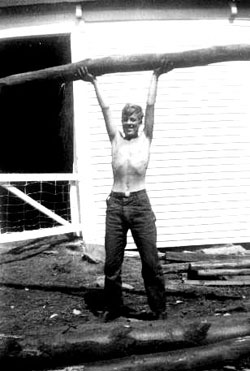 This same fellow (pictured at right) got hot one day and decided to remove his shirt. He hung it on a fence post while he went on with the haying. At the end of the day he went back to retrieve his shirt and found that the cows had eaten all but a few raggy tags of the salty thing.

I might note that is no longer an open field. It has grown up entirely to brush and trees.

In later years, when help was hard to come by, Melvin adapted the rake to be pulled by a tractor and rigged up a trip rope so that it could be dumped by the tractor driver.

If it looked like a shower would come up before the hay was completely dry, the common practice was to cock the hay. These were not real large cocks – they were made with pitchforks, and could easily be spread out again after a light rain. Loading the hay was always done with pitchforks – one or two (or more, depending mostly on the weather – if it looked like rain they would gather all the hands they could) pitching up to the person who was building the load. The forksful had to be distributed evenly over the cart or trailer body in order to get the largest possible load. Also, if the weight wasn’t spread fairly evenly, a sudden lurch of the horses or tractor could send the whole load sliding off. One day when they were hurrying as they were late for chores, Howard’s brother, Kenneth, was helping and suddenly said “Look at the blimp!” and, as he spoke, drove the trailer into a woodchuck hole. This caused Melvin to lose his balance and he slid off the load onto the ground. 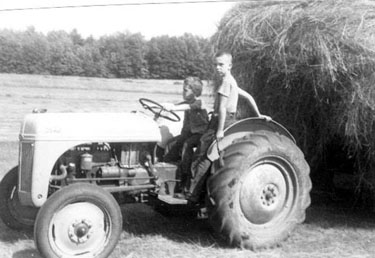 Once the hay was loaded, the sides were raked down so the hay would not spill all the way to the barn. After the main crop was taken off a field, the scatterings would have to be raked and loaded. Pictured are Ethan and Melvin with a small load (1951).

It should be noted here that some fields grew second crops (and occasionally third) which are called rowen. This depends on whether you are harvesting a newly-seeded piece, weather factors, etc.

Once the trailer was loaded, it would be driven to the barn and, after the lower barns were full, they would have to use the horse fork. This ran on a track along the ridge of the barn and was tied by a rope which ran through pulleys the length of the barn and out to the horse (or tractor). Someone on the load would put the grapple (or harpoon) deep into the hay and, when it was ready, the person driving the tractor (or horse) would drive ahead – the rope would pull the grapple up to the ridge where it would catch onto the track. The person managing the grapple rope would holler “Whoa” and then trip the catch of the grapple, and that would make the hay drop into the mow. This had to be distributed and tramped so that the maximum amount of hay would fit.

Weather is always a concern of farmers. Some dry years the hay lost alot of its goodness and became brown by harvesting time. When this happened the cows would have the treat of having their hay drenched with black strap molasses. They’d get so they wouldn’t touch a bite until the molasses was poured on.

Wet weather caused just as many problems. When the hay was harvested a little too soon (because it was going to rain any minute) they would sprinkle salt on the loose hay to keep it from getting overheated in the barn.

One summer’s day in 1967, Melvin and Howard and some neighbor children had just put a load of hay into the barn when a violent thunderstorm hit the area. Melvin was quickly trying to nail a canvas over the loft opening, so the hay in the full barn wouldn’t get soaked, when a bolt of lightning hit and knocked Melvin to the floor and gave Dan Forest a shock. Howard thought his son was dead, but he came to and was allright after a few hours. Dan was afraid to walk down the road to his home, for fear the lightning would strike again.

In 1939 the Longleys got their first tractor. It was what they called a “home made job” – front end a Chevrolet car and the rear end of a fire truck. This was made by an Ayer mechanic, Homer Davenport, and was their pride and joy to use. Being a particularly dry summer, one of the first jobs for the new acquisition was to haul water for the cattle from a nearby brook.

In 1940 Melvin spent his savings of $750. from his poultry business to buy a brand new Ford Ferguson tractor with plow. This vehicle is still in good running order and is used for sawing wood and other general work. Longley tools and equipment always have had the best of care, were properly greased and oiled, kept under cover and in good working order. 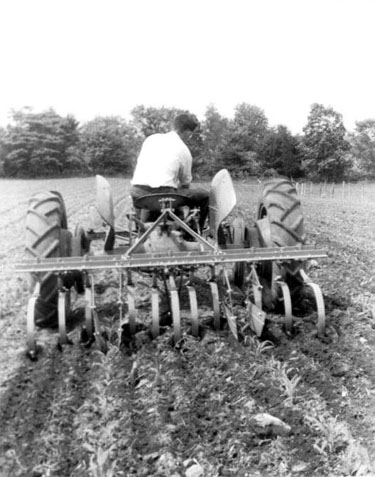 A Ford was purchased in 1956 and a secondhand, tricycle type, Farmall H was bought from Howard Kimball of Lunenburg in 1964. John, the last Longley horse was sold in 1941 and King Tractor reigned supreme!

Various tools were tried and the essential ones purchased – mowing machine and rakes, manure spreader, tiller (pictured), weed sprayers ensilage cutter, etc. Other implements that were tried, but not found practical were the buck rake and the pinwheel rake.

One of the luxuries purchased in 1946 was the New Idea hay loader. This, pulled behind the hay trailer, was a great labor saver. One man (or sometimes a woman) on the load could arrange it and tramp it while other help was raking or doing other chores. 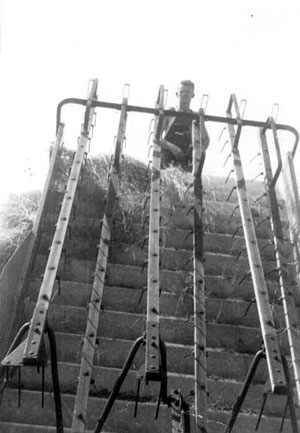 Several different balers were tried and used. These are complex machines that can do a good job fairly quickly when they are operating properly. The tension has to be adjusted just so – depending on the dryness of the hay. A moderately tight bale is desired if the hay is thoroughly dry, but, if rain clouds threaten, sometimes the farmer has to bale before he is satisfied with the hay; in that case, the tension should not be so great. Complicated knotters always seem to break down when you’re in a hurry.

Soon after the purchase of the baler, a hay elevator was desired. Even though the grapple fork could pick up twelve bales at a time, too often they would slip out of the grapple and fall back, some of them broken, onto the load. Using the electrically powered elevator, someone just had to set the bales onto the endless belt and up they would go into the loft. Someone had to be at the other end so the bales would not clog the way. Clackety-clack the old track would go.

Areas around the buildings or in hard-to-get-at places were mowed with a scythe. A novice at swinging a scythe soon finds that this method of mowing is not as easy as it looks. The snath has to be held at just the right angle, level with the ground as it is swung – otherwise the grass is all different lengths and can be very sloppy.