The Last Dairy Farm in Shirley

Melvin Whittemore Longley was born on February 2, 1849 at the Longley Homestead on Center Road in Shirley Center, Massachusetts. He was one of eight children of Stephen Melvin and Mary Gibson Longley. 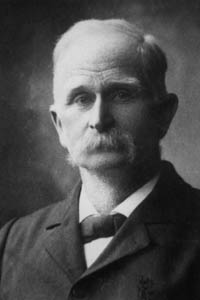 While there aren’t many family records of Melvin’s farming activities, the 1899 Town Valuation Report shows that he owned two horses, twenty four head of cattle and a hundred fowl, so he was pretty much tied to farm chores at that time. As a resident of Shirley he served as an Overseer of the Poor on the School Committee, Board of Assessors, and was Selectman several years.

Melvin was a part time school teacher and auctioneer, and served in the Massachusetts Legislature in 1901. 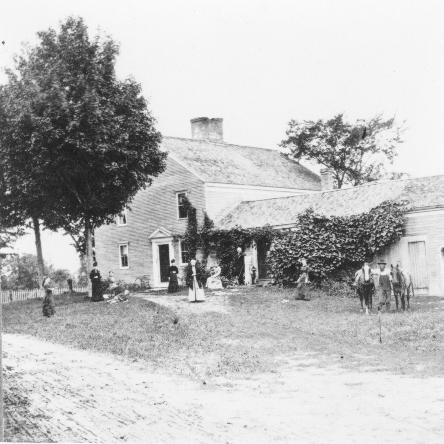 It is rumored that Melvin W. had an interest in the Shirley Shakers for some years, but by 1875 or so, he had deserted their ranks and later married Abby Newell Park of Shirley.

At right is an old view of Longley Homestead.

Following are a few notes from a diary written in 1909:
July 5, 1909 – Howard and I got in four loads of hay.
July 6 – Mowed south of the orchard. Went to Grange in the evening.
July 9 – Put in seven loads of hay.
July 15 – Put in four loads of hay. Went up to Allen’s on Flat Hill to see his mowing machine.
July 22 – Howard and I got in one load of hay – the last.
July 23 – Worked all day at the Hall – assessing.
August 12 – Mr. Carter and I hayed the Brown Meadow – brought home four loads of hay.
August 28 – Plowed awhile in the morning and then got out ten loads manure and harrowed it in.
August 30 – Assessed in the afternoon for the Water District.
September 9 – Assessed in the afternoons closed out the books.
September 15 – Sealed the scales at the State Industrial School.
September 18 – Worked on the stable floor all day – stuck a nail in my foot.
September 24 – Howard teamed a load of sawdust.
September 25 – Howard picked apples on the hill all day.
September 27 – Howard went for some boxes at Cook’s.
October 4 – Opened the rowen and put it in in the afternoon. Two loads. Bought the bull of Wright.
October 9 – Howard and I dressed 7 chickens for the Industrial School – some of them weighed 7½ lbs.
October 11 – Got in wood and worked on bbls.

In 1910, when his father died, Howard, aged 17, was left with his mother and four sisters and a brother to support. Longley Homestead built in 1786 by Joshua Longley, had been farmed for five generations and Howard was determined to continue the family tradition.

Howard had a milk route around the town of Shirley and for a few months he took the milk over to Lunenburg to William R. Proctor who had a dairy enterprise there. One day Will Proctor told his daughter, Lucy, that there was a nice young man from Shirley who brought the milk daily, and asked her if she would like to pick up the milk the next day. Lucy agreed, and after she and Howard met, she decided to pick up the milk regularly.

The couple found many mutual interests and spent much of the next five years in each other’s company. Then, in 1917, when Lucy was 20 (Howard was then 25) they married. Several months later they purchased the Howard Fuller place on Whitney Road which adjoined Longley Homestead in a north westerly direction. 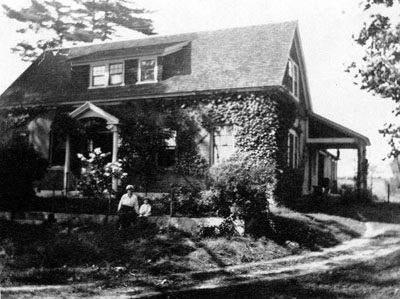 Their two children were born in the brick house – Ellen Winniferd in 1918 and Melvin Proctor in 1920.

The main source of income for the family in those early days was the apple orchard and a few dairy animals. The barn, built by Dave Marsh, may have been equipped with a few cows when they bought it.

In 1923, after similar legislation in Vermont, the Massachusetts Legislature adopted a mandatory tuberculin test for all dairy herds. 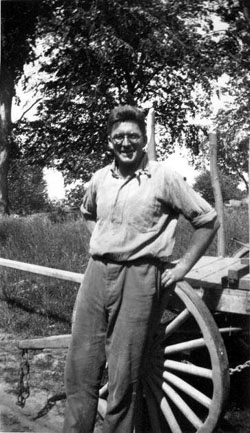 At this time the Longley herd of eight animals was found to be infected and had to be confiscated. (The state allowed a compensation to farmers for their losses.) Unfortunately, the awareness of the problem was discovered after Melvin had contracted tubercular glands in his neck. These required trips to a doctor and many weeks of bandaging of the draining glands. Pictured at left is Howard in about 1924.

Back in those days if an animal required the services of a veterinarian a doctor was called to come by horse and buggy from Fitchburg.

Towards the end of 1925 Howard became so badly crippled with arthritis that he was less able to continue his regular chores, and neighbors helped him to get in crops and tend the animals. Finally, the animals had to be sold and the orchard was rented. Medication was of little help so, as a last resort, the doctor convinced Lucy and Howard that a winter in the warmth of Florida might be of benefit to him. 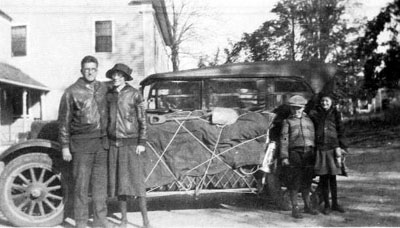 Lucy’s father gave them his 1919 Buick for the trip. They loaded the roof, the luggage racks, and the back of the car with supplies to last through the winter. Space was reserved for Ellen and Melvin to sit so both could see out the windows.

Lucy did all the driving and the first day they got all the way to Hartford, Conn. – 125 miles.

A neighbor, John H. Farrar, had built some cottages at Holly Hill and Fulford, Florida. He offered the family the use of these and they spent part of the winter in Holly Hill and the last months in Fulford.

As Fate would have it, Howard improved, and by April of 1927, they travelled back to their farm, Meadowcroft.

The apple trees bore fairly well for a number of years and these were picked and stored in the apple cellar under the shed. Those that were not sold locally were shipped to Boston. The main varieties grown in the orchard were Baldwin, Rhode Island Greening, Palmer Greening, Hubbardston and Delicious.

People would often buy the crop from one of the trees. Horace Harris had a particular Rhode Island Greening tree he liked to pick. Two Nowokunski brothers chose to harvest a couple of trees near the wall – just by estimating the number of bushels they would yield.

In 1933, during the depression, a government agency was authorized to buy farmers’ apples to be exported to England. After packing and shipping the number of barrels agreed upon, the Longleys waited for a check to arrive. When a reasonable length of time had elapsed, Howard wrote a letter of inquiry to the agency that had made the arrangements. A reply came saying that people who had not paid their taxes were being paid first. Howard was furious at being penalized for having paid his bills. 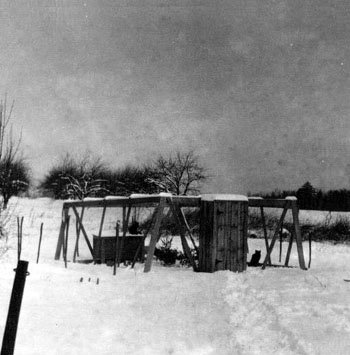 Somewhere about this time someone got the family interested in investing in foxes. By purchasing a pair of silver foxes, one only had to wait until they had several litters and then sell the pelts at an enormous profit. This turned out to be a rather risky business. If the mother (vixen) got frightened, like when an airplane flew over, they would eat their pups.

The profit was in the silver pelts but this pair and their offspring litters were all those with black fur. The few that did grow large enough to skin were shipped to New York and sold for about $35. each. A silver would have brought around $300.

In 1936 Howard’s mother died and the family moved back to Longley Homestead. They decided to dispose of unused accumulation of the years and hired Levi Lashua of Fitchburg to hold an auction in May of 1937. Aside from selling some of their own excess tools, etc., they got a few head of livestock, etc. from other members of the family. They picked up some things from Howard’s aunt, Mary Park, on Center Road. Melvin and his cousin, Donald Bradford, who were inseparable during those years, had a rollicking time bringing the things for the sale. They loaded a buggy, two wagons, tip cart, a road cart, with farming tools and whatnot piled on the various vehicles – all these hitched behind the 1934 station wagon. What a sight (and sound!) they made parading the long string up Center Road.

On another trip Donald and Melvin tried to guide an old baby carriage from the tail board of the car. It looked easy, but the thing whipped from side to side and it was all the two of them could do to keep ahold of it.

Some of the things sold at the auction would bring a fine price today, but back then, they were happy to get $10. for a wagon with jack; an ox yoke went for 5¢ and a double harness brought $8.75. 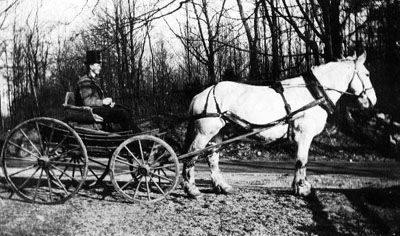 Up until 1939 the farming was all done with horses. Pictured is Melvin riding in a wagon pulled by ‘Jim’.

One mouse-colored horse, when he saw his master coming with the bridle, would regularly high-tail-it off to the farthest corner of the pasture and wait. As soon as he was approached he willingly allowed the bridle to be put on and off he would go for a day’s work – it was a game he liked to play.

One horse they had would be lame for the first mile or so that he walked. After he had gone a few minutes he’d be all right. Howard made a pad of tar and oakum which was inserted, with a piece of leather, between the hoof and the shoe.

It was not unusual for Howard to borrow one or two of W. R. Proctor’s horses or to ride their horse over to Lunenburg to help Will Proctor with his work. Melvin remembers how proud he was the day his father allowed him to ride the horse the six or seven miles all the way to Grampa Proctor’s by himself.

Most farm jobs were done with one or two horses. At a time when many farmers owned only one horse, they would join forces and share the work. One such enterprise was in mowing the grass for making hay. Howard and a nearby farmer, Earl Graves, each owned a 3½ foot one-horse Buckeye mowing machine. One of these would have necessitated countless trips around a field to get any sizeable piece out. So they combined equipment and, with one horse pulling one machine a short distance behind, and 3½ feet to the side, they could make 7 foot swaths and mow a field much more quickly. They would stop in the shade once in a while to give their horses a rest. When one’s fields were done, they’d go over to the other’s farm to cut his hay in the same way.